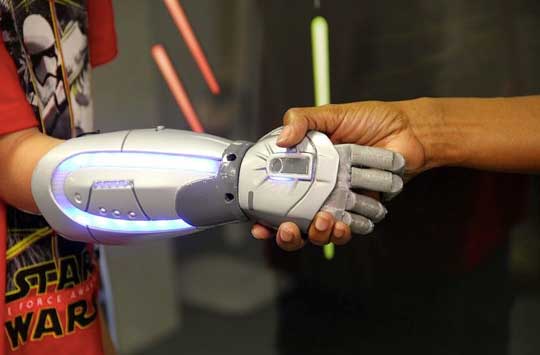 Today, part of the revolutionary process of the Canadian non-profit social enterprise is the production of high-quality prostheses for children and young people, the method being faster than the conventional gypsum casting method - using a 3D printer and other 3D technologies.

The World Health Organization estimates that 30 million people in low-income countries need prosthetic limbs. There is hope that 3D scanning and printing can help.

Modern techniques in the developed world support the production of 3D prostheses that are actually used to help patients. The study, organized to test these prostheses, involved 60 Cambodian children and young people. The process can combine scanning, modeling and 3D technologies to produce two types of prostheses: tibial (below the knee) and ankle prosthetics.

The computer process allows the medical staff to store the projects in the form of files, to share the examinations with their colleagues, as well as to maintain the patient's history. The clinical trial of 3D technologies for the production of lower limb prostheses was conducted in three developing countries. It is the first of its kind on such a scale.

In the developed world, a quarter of dentures in clinics that are manufactured with conventional plaster casts typically take between one and two weeks to deliver. The idea is to replace them with computer-aided design, computer production equipment to order, which will allow them to be delivered within 2 days.

The company, which has been supplying custom prosthesis and footwear equipment for about 30 years, predicts that 3D technology will be used in almost every field of medicine within the next 10 years.

3D printing has a "transforming effect on the medical industry" and in particular the prosthetic sector. Joe Kempton, an analyst with the company's global marketing department, estimates that total 3D printing costs, including printers, materials and services, are about $ 947 million in 2016, but will rise to $ 1.6 billion by 2018.

"3D prosthesis printing is being used more and more in hospitals and clinics around the world," says Kempton.

"The ability to quickly repair and adapt any part of the prosthesis is extremely useful, especially in body changes, e.g. as children grow. "

The electronic system takes the calls to the GPs